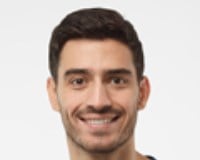 Full Bio
Learn about our editorial policies
22 Aug 2021
Share
Manny Pacquiao (L) and WBA welterweight champion Yordenis Ugas face off during a news conference at MGM Grand Garden Arena. (Steve Marcus/Getty Images)
Share this article
Legendary Filipino Manny Pacquiao takes on Yordenis Ugas in Las Vegas on Sunday and we have looked at the odds for some Pacquiao v Ugas betting tips.
Pacquiao will fight Ugas after scheduled opponent Errol Spence Jr pulled out of the fight with an eye injury.
The WBA world welterweight title fight takes place at the T-Mobile Arena in Las Vegas in the early hours of Sunday morning and is live on Sky Sports at approximately 04:00 BST.

Rolling back the years?

It may not be the fight we all wanted to see, but we should be thankful that Errol Spence Jr is even with us, let alone planning to take on eight-weight world champion Pacquiao
Spence Jr (27-0, 21 KOs) was involved in an horrific car crash in Dallas in October 2019, which saw him ejected through the front windscreen of his Ferrari. He is lucky to be alive.
The IBF and WBC welterweight title holder underwent an eye operation last week to repair a detatched left retina, scuppering perhaps his one chance to take on Pacquiao, who is at the end of his career.
It is going to be a while before we know if Spence will be able to continue fighting and his scheduled clash, were he to win, would have been a passing of the torch.
As it is, Pacquiao attempts to wrest the WBA welterweight title from Ugas (26-4, 12 KOs) who is a tough opponent.
Pacquiao (62-7-2 39 KOs), who has won 12 world championships in total, is 42 years old now and is 2/11 to beat the Cuban, who was preparing to make his first title defence against Fabian Maidana on the undercard.

Pacquiao claimed the WBA ‘super’ title with a points win over Keith Thurman in July 2019, but the governing body has since stripped him of the belt, elevating Ugas to ‘super’ champion in January.
Seven years Pacquaio’s junior, Ugas has lost just once since 2014 and that was a split decision against Shawn Porter in March 2019. He has gone 3-0 since then, while Pacquiao has not fought since July 2019.
Ugas is 11/4 to retain his title, while a draw or technical draw is on offer at 20/1.
This will be the Filipino’s 72nd professional fight and his biggest test is not facing an opponent who has a different style – Spence is a southpaw, Ugas is an orthodox fighter – it is age and conditioning for a 12-round bout.
Both are aggressive, offensive fighters and Ugas may be able to separate himself from Pacquiao in the later rounds. Ugas is 9/2 to win on points in Pacquiao v Ugas betting tips and 33/1 to win in rounds 10-12.

Writing on the wall?

The Cuban has never lost by knockout and it is 6/4 for Pacquiao to win by a KO or a TKO or a disqualification.
Likewise, Pacquiao hasn’t been knocked out since losing to Juan Manuel Marquez in 2012.
The Pacquiao v Ugas odds show Ugas at 9/1 to win by a KO or TKO or a disqualification.
If he looks poor and loses or struggles to win, Pacquiao will likely hang up his gloves. He will see the writing on the wall and won’t want to get beaten up by Spence if, and when, he returns.
That said, should he win – and it is 4/6 that this fight goes the distance in Pacquiao v Ugas betting tips – he will likely call out Floyd Mayweather for a rematch, as he struggles to live with that unanimous verdict defeat six years ago.
There is little chance of that rematch happening, as Mayweather looked much older than his 44 years against YouTuber Logan Paul recently and would be fodder for Pacquiao, who is 11/8 to beat Ugas on points.
View the latest boxing odds at Coral
All odds and markets correct as of date of publication
GB